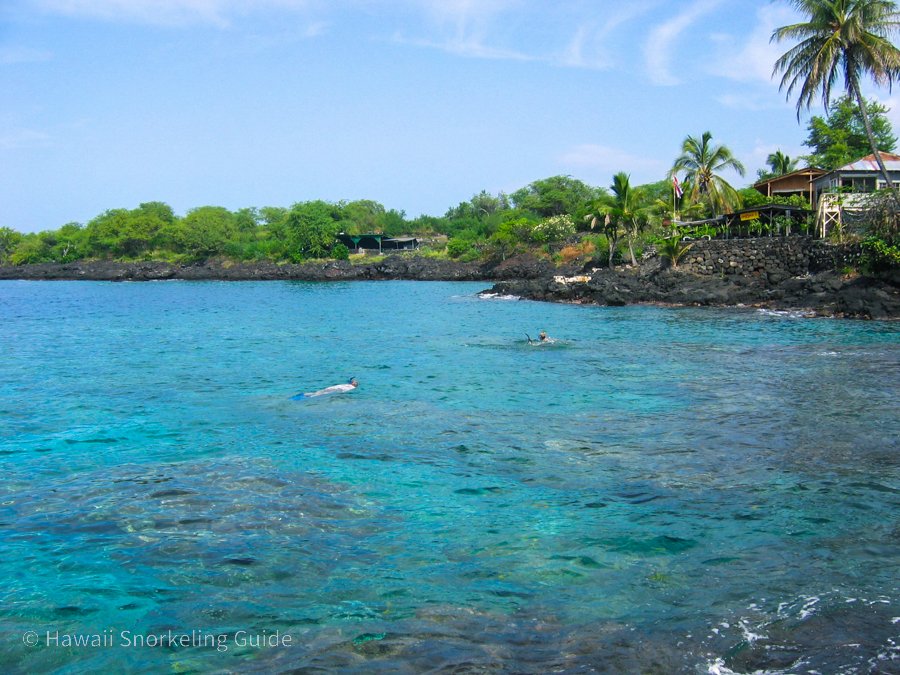 Honaunau Bay, or City of Refuge as it’s sometimes referred to, is my favorite snorkeling beach on the Big Island. The direction the bay faces hides it’s inner shoreline from the predominant coastal swells.  That’s a fancy way of saying that City of Refuge snorkeling is calm and has exceptional visibility most of the year.

Honaunau Bay is overlooked by Puuhonua O Honaunau National Historic Park.  This 182 acre Federal park preserves the historic site and Hawaiian temple where ancient defeated warriors, non-combatants, and sacred law breakers found sanctuary.  Hence why the park and bay is commonly referred to as The City of Refuge.  The grounds around the bay were home to powerful ali’i, or chiefs, of old. 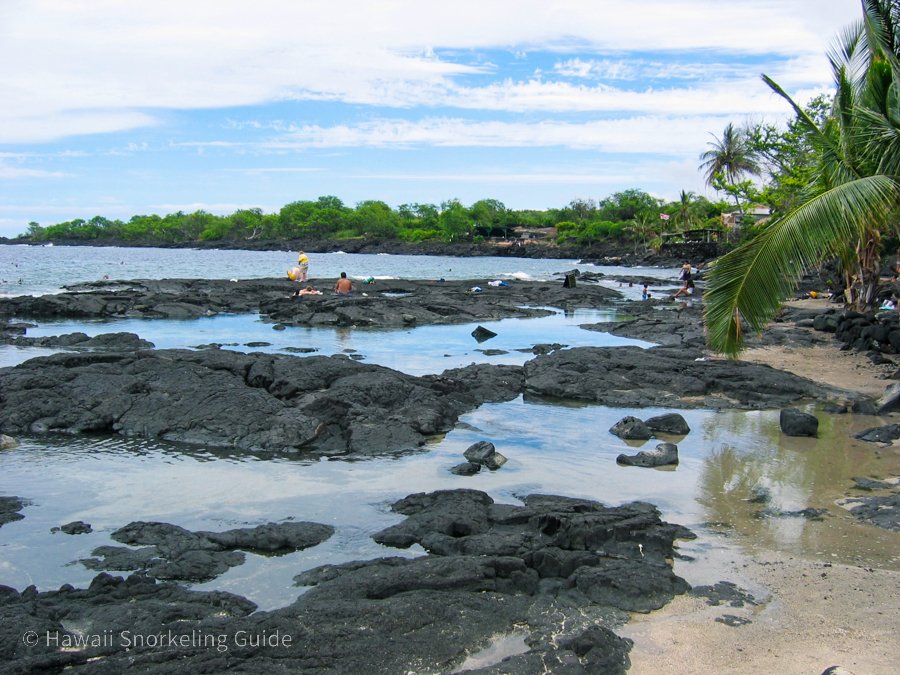 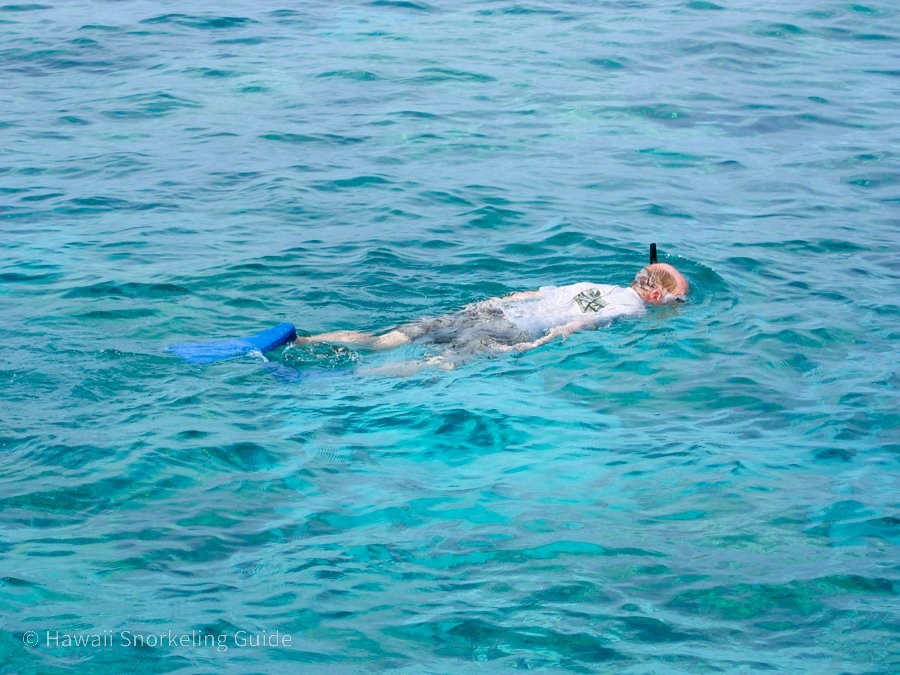 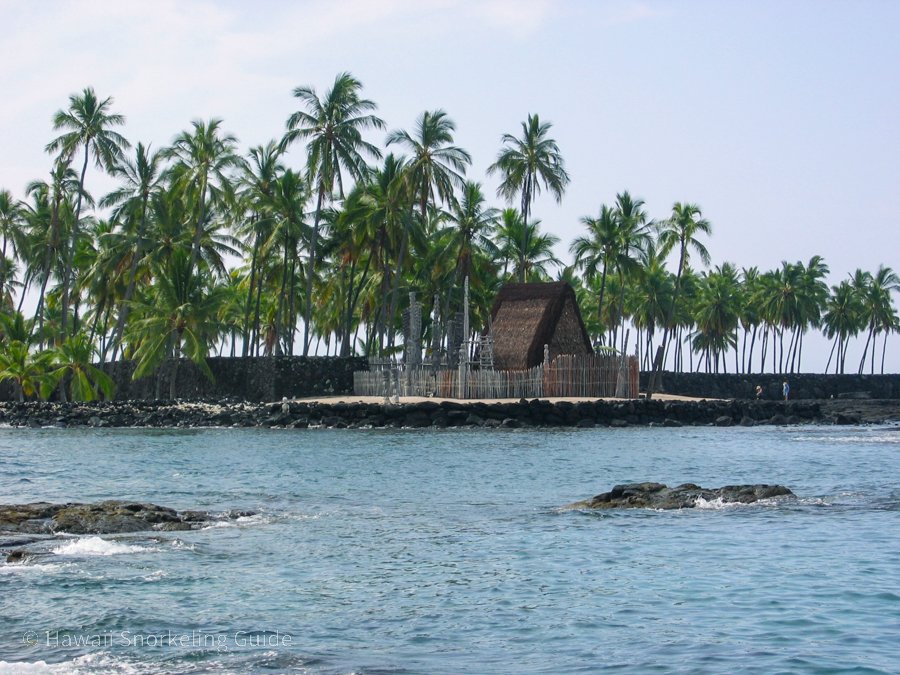 Beautiful Honaunau Bay is fronted by large, smooth, lava rock flats.  These rock flats are just about the same height as the water line which makes for a perfect shelf to sit on as you don your snorkel gear.   Talk about ease of entry!

Near shore the average depth is only about 10 feet.  Great for you because the abundance of sunlight reaching the bottom grows healthy gardens of coral.  In case you didn’t know… fish LOVE coral.  Parrot fish, tang, surgeon fish, moray eels, jacks, turtles… you name it, they’re here.  Almost every Hawaiian fish you’ve seen in an aquarium and many more you won’t.

Out in the center of the bay the depth drops dramatically to well over 100 feet.  If you’re an expert skin diver you’ll love the challenge.  You may even see one of the local skin diving clubs practicing their breath holding skills in the deeper water.

Honaunau is also a famed scuba diving location for beginners and experts alike.  On any given day you’re likely to see at least one of the local dive shops certifying new divers.  If you scuba, be sure to set aside one day for Honaunau, you can’t go wrong. 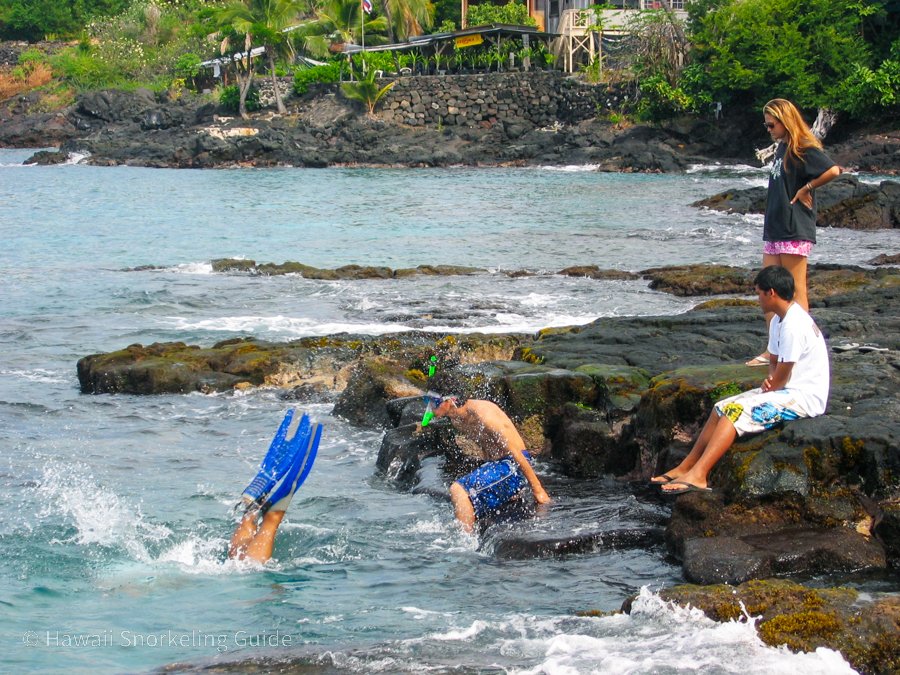 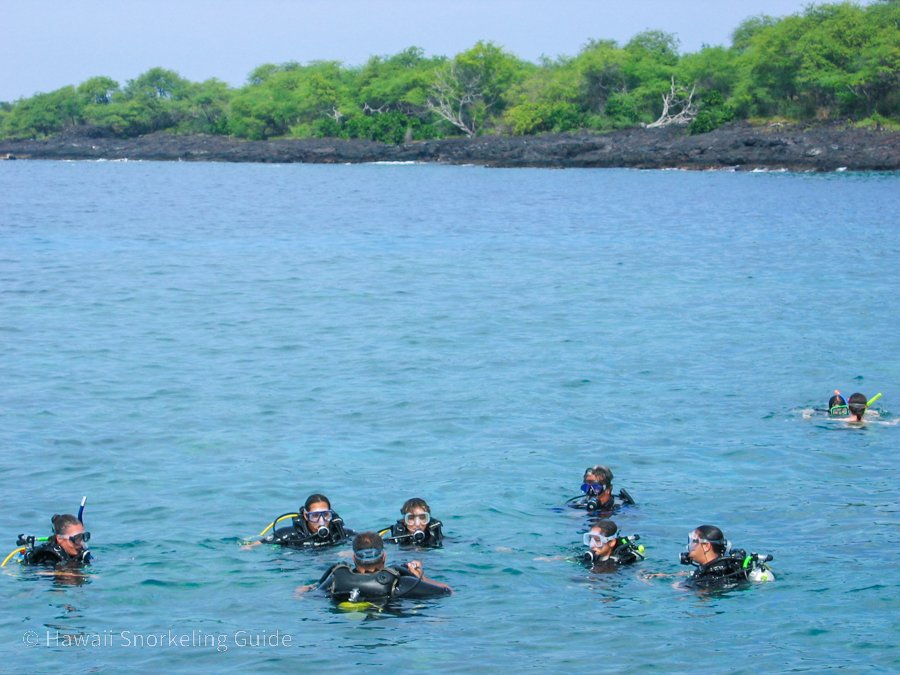 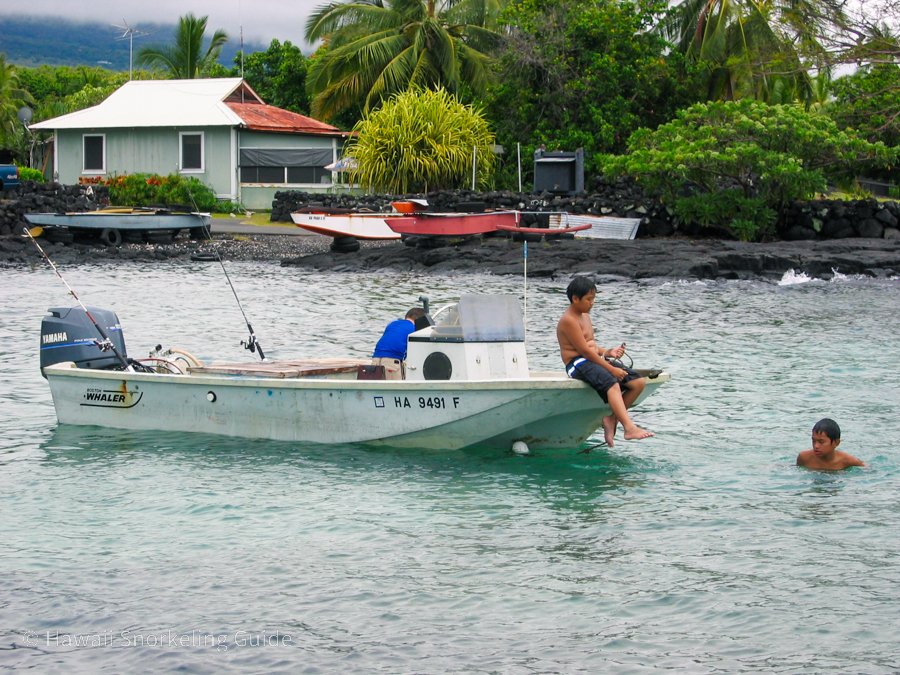 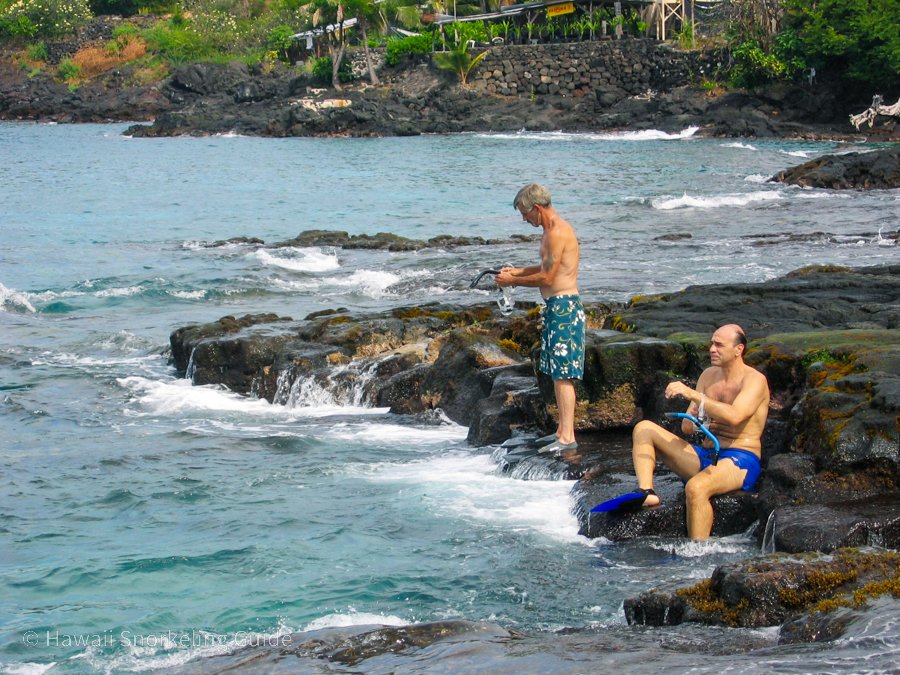 Easy entry, protected from swells, great for the beginner to the expert, teaming with fish and marine life…

What more could you ask for?

Hmmm… alright, alright, you twisted my arm… how about…

We aren’t the only creatures that like calm, warm water.  Hawaiian spinner dolphins feed at night then rest and take care of their young in the calm inshore waters like Honaunau Bay during daylight.  Although, it’s hard to predict when they’ll be in the bay, when they are, there’s a good chance they’ll stay all morning.

Dolphins tend to be a little shy at first but can be quite curious and friendly once they realize you’re not a threat to them.  Believe me, the experience of quietly sharing the ocean with these creatures is nothing short of awe inspiring.  I’ve even had them bring their babies by to show them off to me.  I guess all parents are the same, huh?

Insider Tip: The north (right) and south (left) side of Honaunau Bay have very different snorkeling depths.  I’d make it a point to snorkel on both sides so you don’t miss anything but here’s a heads up of what to expect:  The left-hand side is the shallower side and tends to be where I see the most turtles.  The depth averages from about 10 to 25 feet.  The right-hand side starts out shallow and slowly descends to over 30 feet and then again dramatically to well over 100.  In this deeper water is where the spinner dolphins like to hang out. 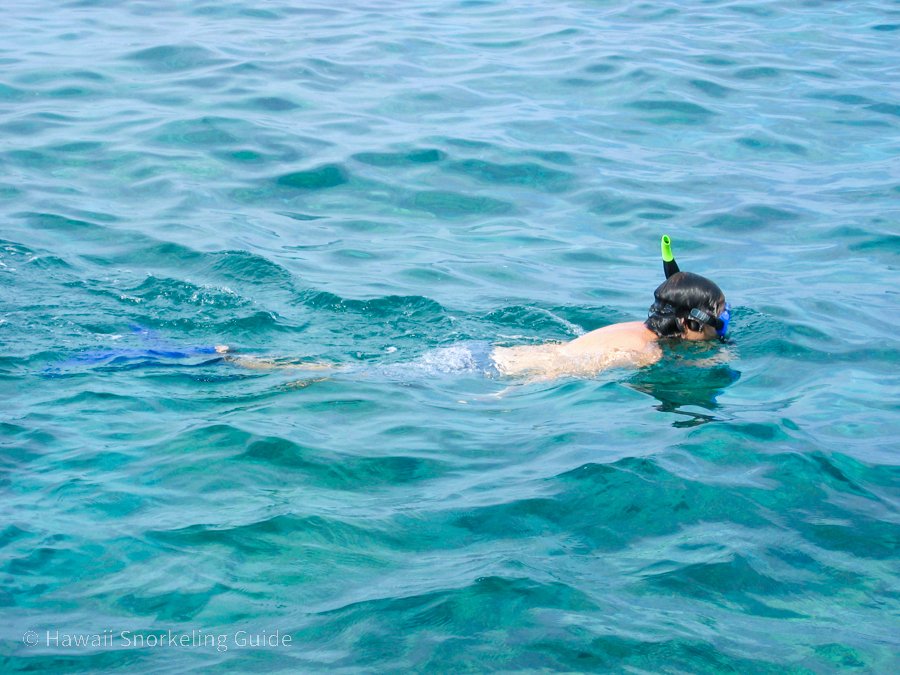 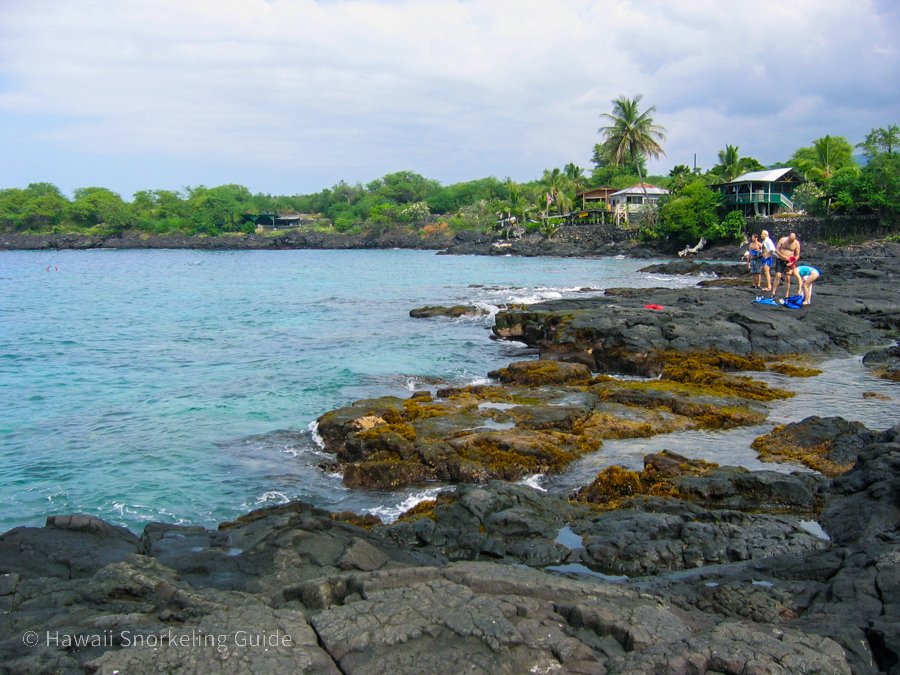 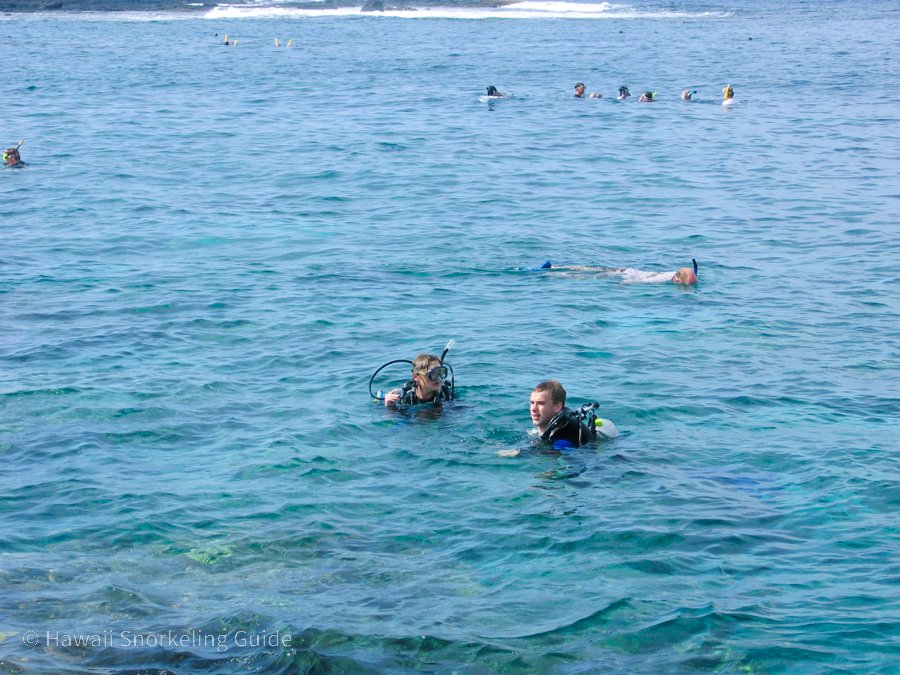 Honaunau Bay doesn’t have an actual parking lot, so you’ll be parking along the road that runs next to the water.  Parking is limited so get there early.  The skies above Honaunau typically becomes cloudy in the afternoons making for less sunlight in the water, so mornings are the best time to go, anyway you look at it.  If I were you, I would try to be there before 10am, 9am is better.

There are no concession stands or showers.  Remember to bring your own food and water.  There are port-a-potty restrooms available.

How do I get to City of Refuge / Honaunau Bay?