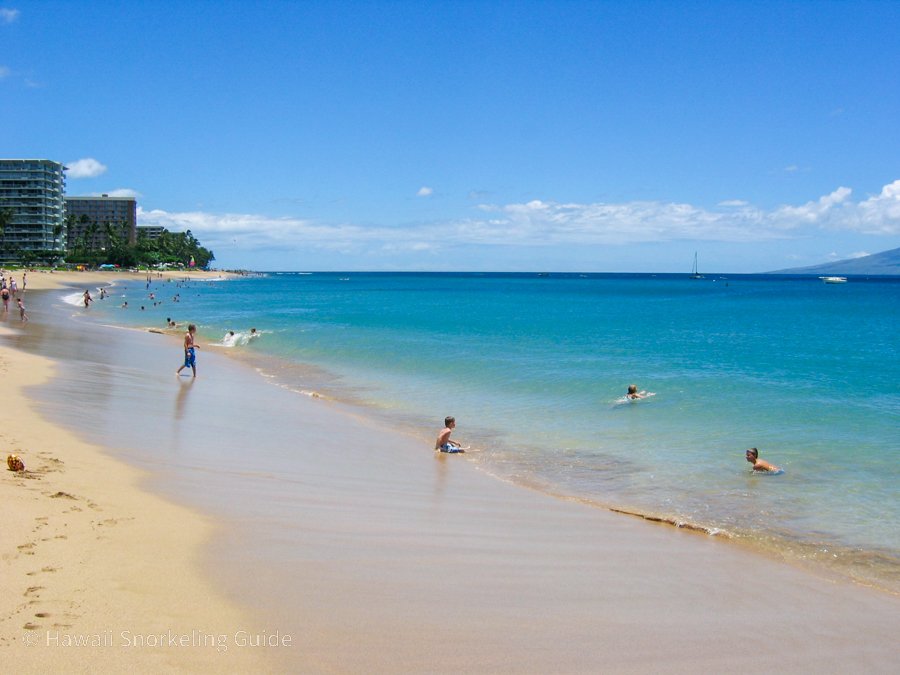 Rated one of the top beaches in the world

Kaanapali Beach is a 3 mile long picture perfect stretch of white sand located on the western shore of Maui.  Its been rated one of the best beaches in the world by numerous travel publications such as Condé Nast magazine.  Black Rock is the prominent rocky peninsula and snorkeling spot at the north end of the beach.  The combination of great ocean conditions and the seemingly endless white sand make snorkeling Black Rock at Kaanapali the complete beach experience.

Ka’anapali Beach is quite possibly the most breathtaking beach on the Valley Isle.  After experiencing the clear blue water, well-mannered surf, and warm sand, I’m sure it will become one of your favorite places in all of Hawaii.  The soft powdery sand is literally the best on Maui. 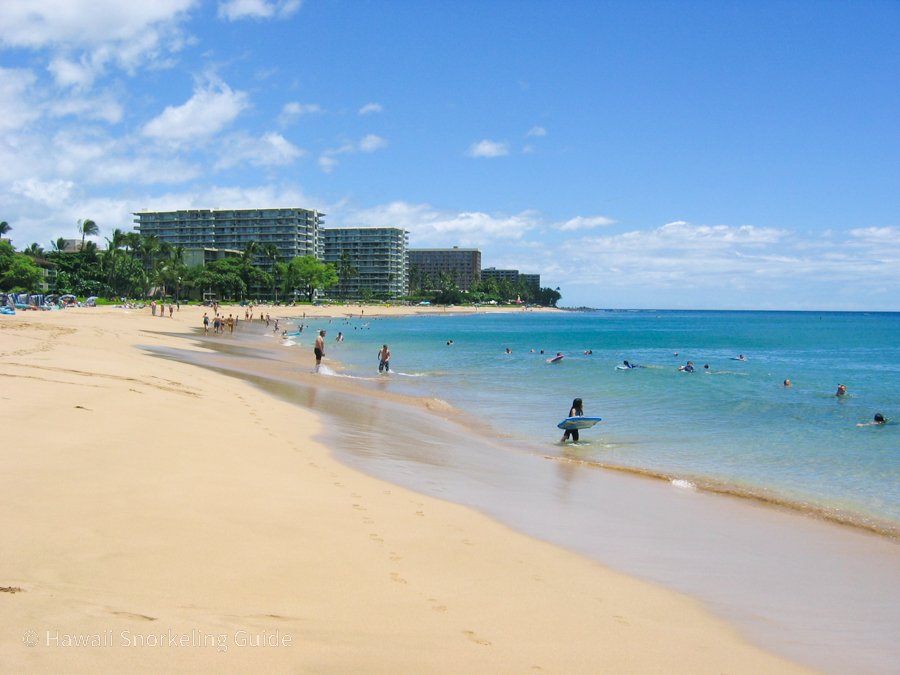 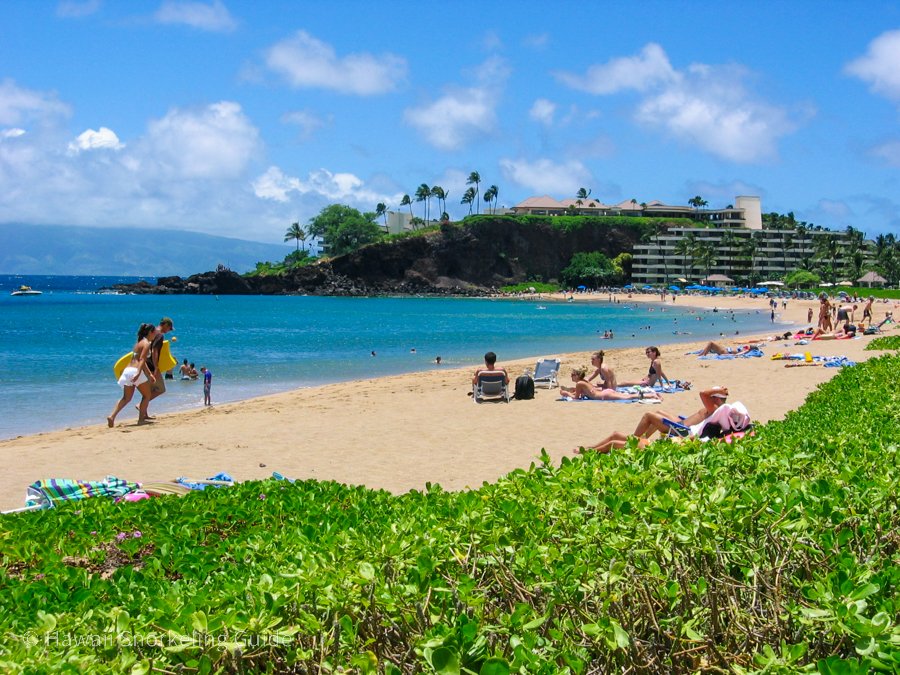 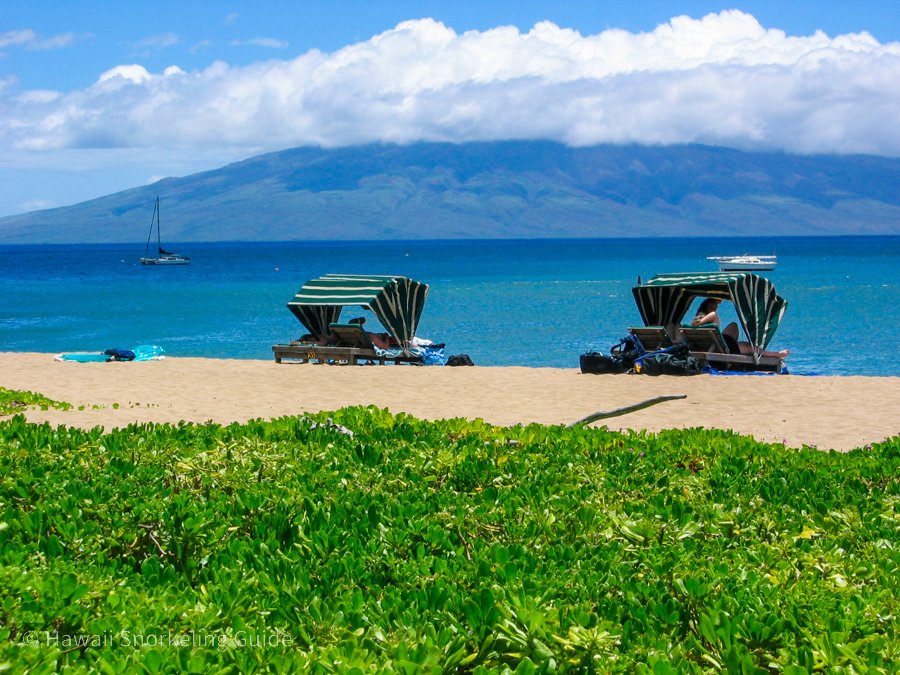 A beach walk runs parallel with the sand the entire length of Kaanapali.  A collection restaurants and shops called Whaler’s Village is about half-way down.  The tiki torches fronting the restaurants makes Kaanapali Beach at sunset one of the most romantic places on the island.  Some of Maui’s best hotels line the shore: Sheraton Maui Resort, The Kaanapali Shores, Embassy Vacation Resort Kaanapali Beach, The Westin Maui, Kaanapali Beach Resort, and The Hyatt Regency Maui to name a few.

There will be a fair number of people on the sand.  But don’t worry.  The beach is over 3 miles long so there will be plenty of room for you.

To be clear, you should snorkel at the Black Rock section of Kaanapali Beach. The rest of Kaanapali Beach is great for sunning and swimming but the Black Rock area has the fish. The water around Black Rock starts at about 8 feet deep and gradually gets to about 25 feet or more as you head North around the point.  You will be mostly snorkeling over sand but following a underwater lava rock ledge.  The visibility is good even in the deeper parts around the point.  Keep an eye out for the turtles that frequent the overhangs along the ledge. 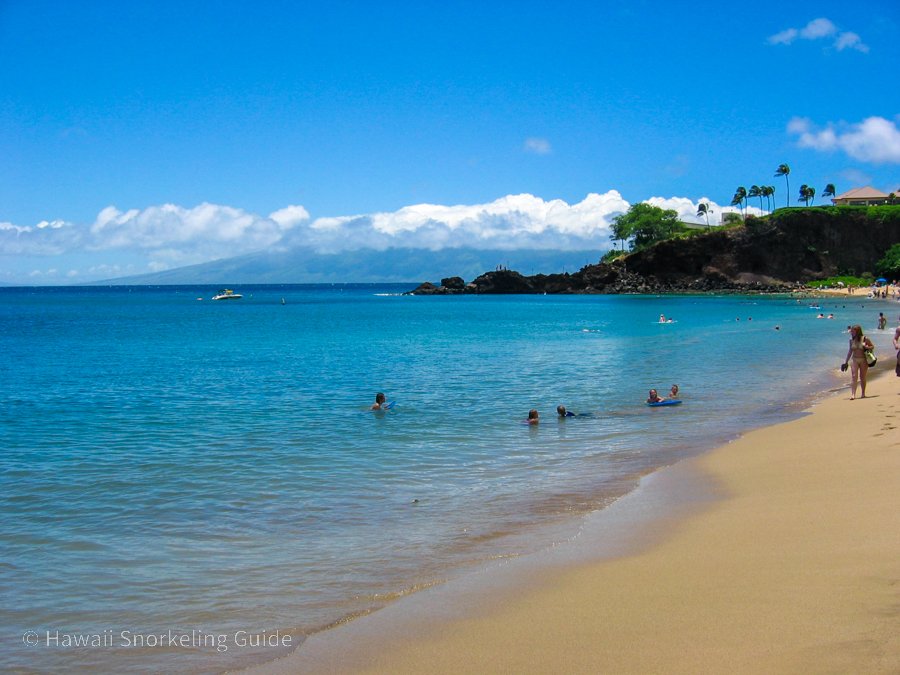 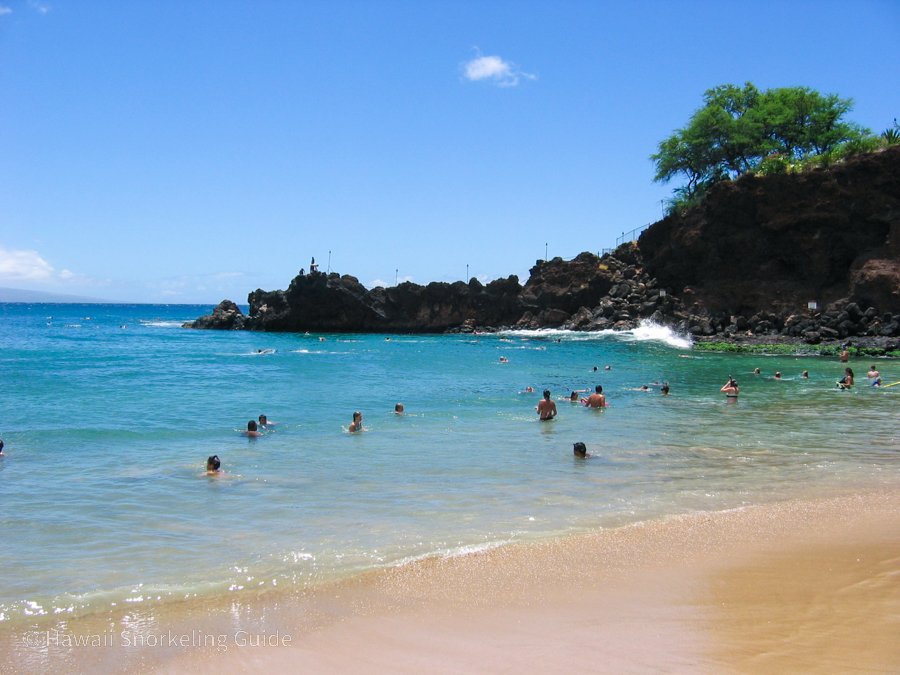 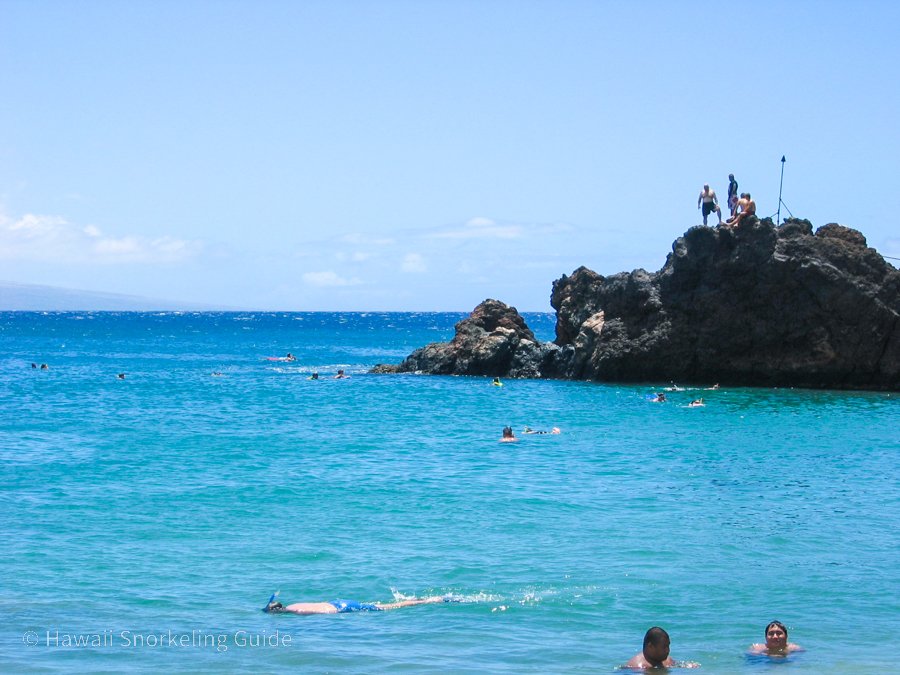 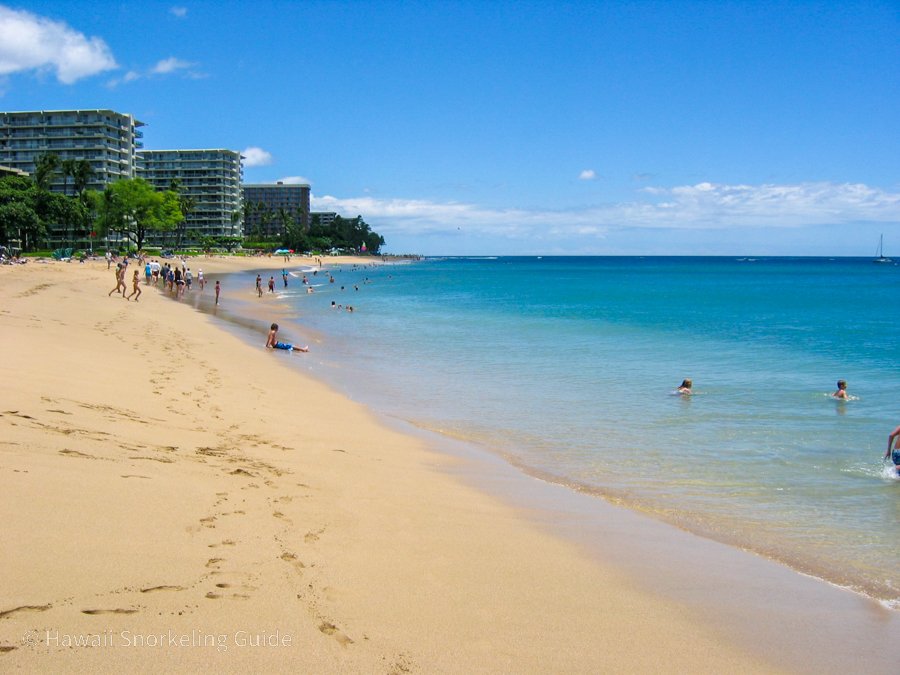 There are showers located all along the beach walk but no public restrooms.  You’ll have to use the facilities at one of the many hotels along the sand.  There is no lifeguard on duty. 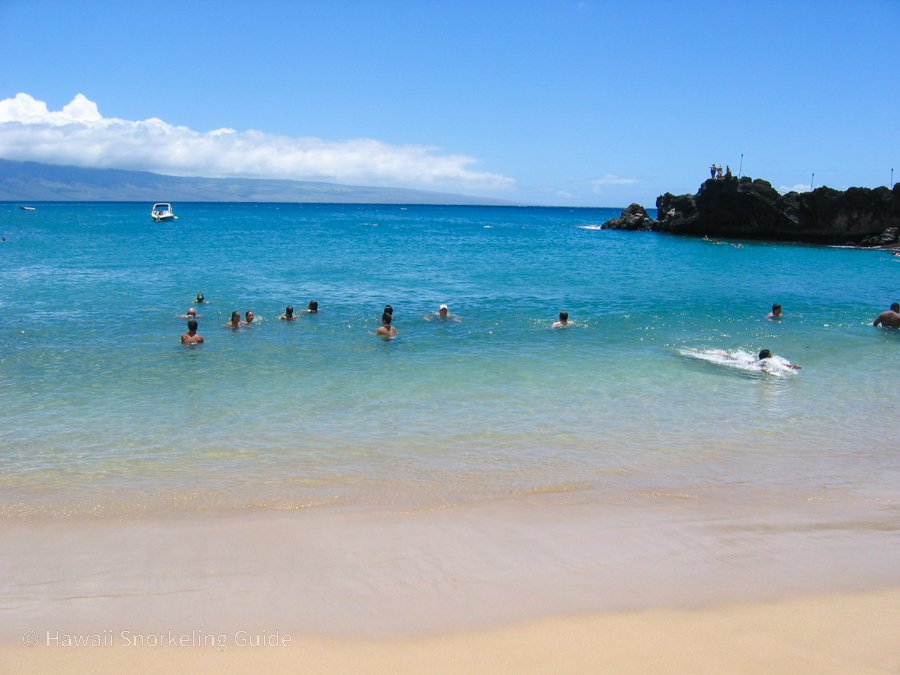 Insider Tip: There is a public parking lot located at ground level at the Sheraton Maui Resort.  The Sheraton is the last hotel located at the north end of Ka’anapali Parkway and is the closest to Black Rock.  There’s a very limited number of stalls so if you want to park for free in the public stalls at the Sheraton, you’ll have to get there in the morning.  If all the stalls are taken at the Sheraton, you can always park at Whaler’s Village, in the center of Kaanapali Beach, although it will be a longer walk to the Black Rock point.  There is a $2.50 per hour charge to park at Whaler’s Village, but it’s free for the first 3 hours if you get a validation stamp at one of the many shops.  You can also park in the Whaler’s village parking lot all day for $20.

How do I get to Kaanapali and Black Rock?

Driving time to Kaanapali from Kahului Airport is approximately 50 minutes.