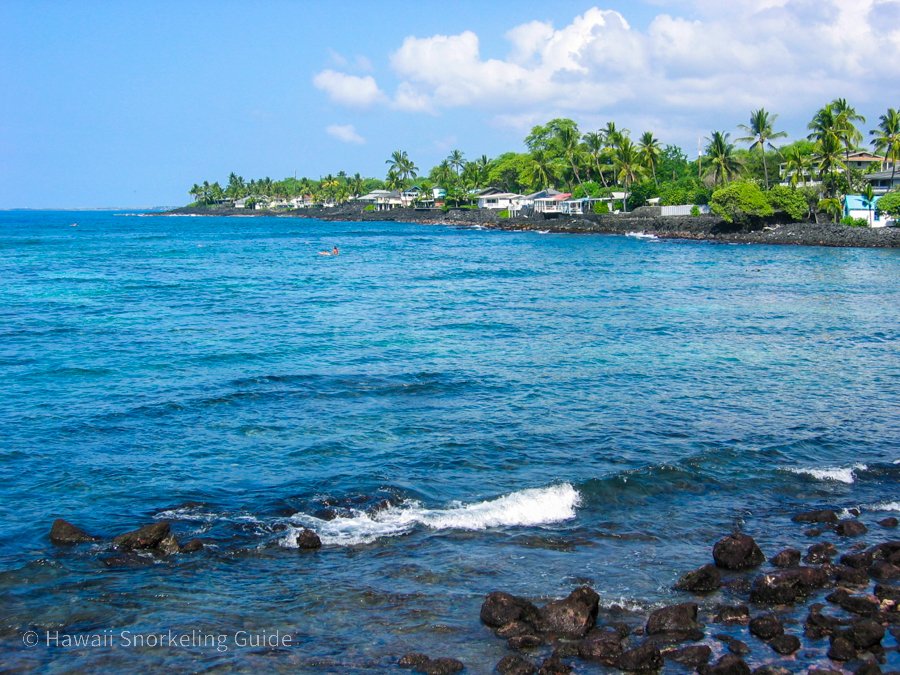 Kahaluu Beach Park is a tiny sheltered cove on the west side of the Big Island right in the town of Kailua Kona.  It’s one of only a handful of beaches in Hawaii with such a large tame fish population.  Kahaluu Beach is not a marine preserve, yet for having no fishing limitations, it rivals and sometimes surpasses the quantity of fish you’ll see at a dedicated marine sanctuary. 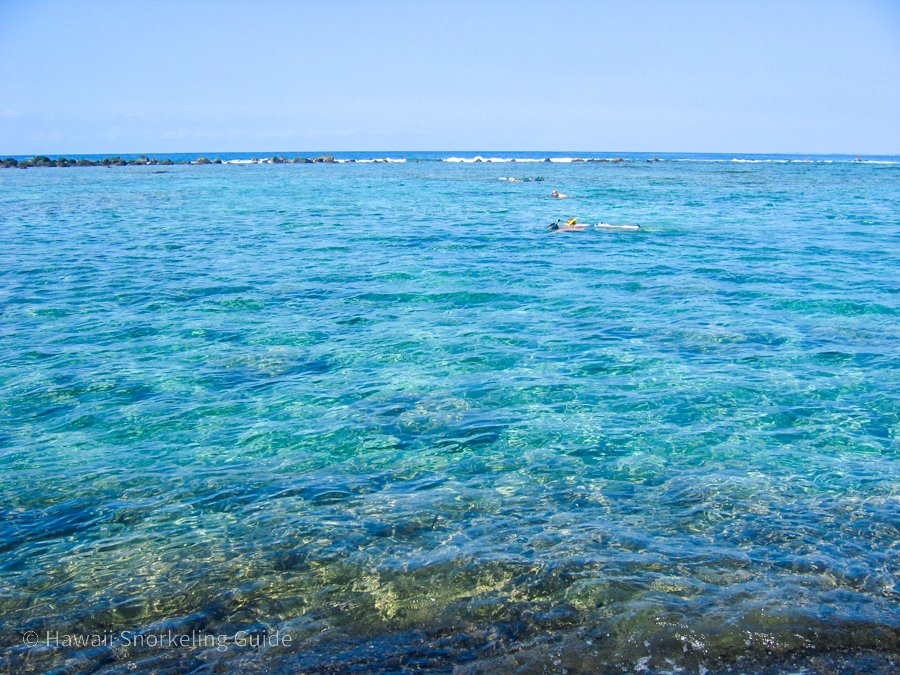 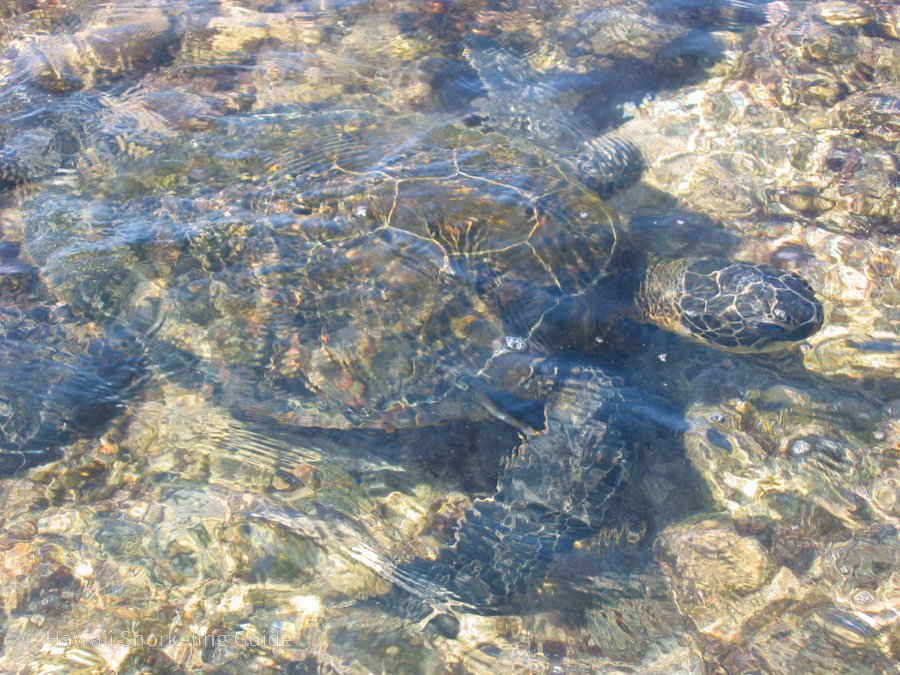 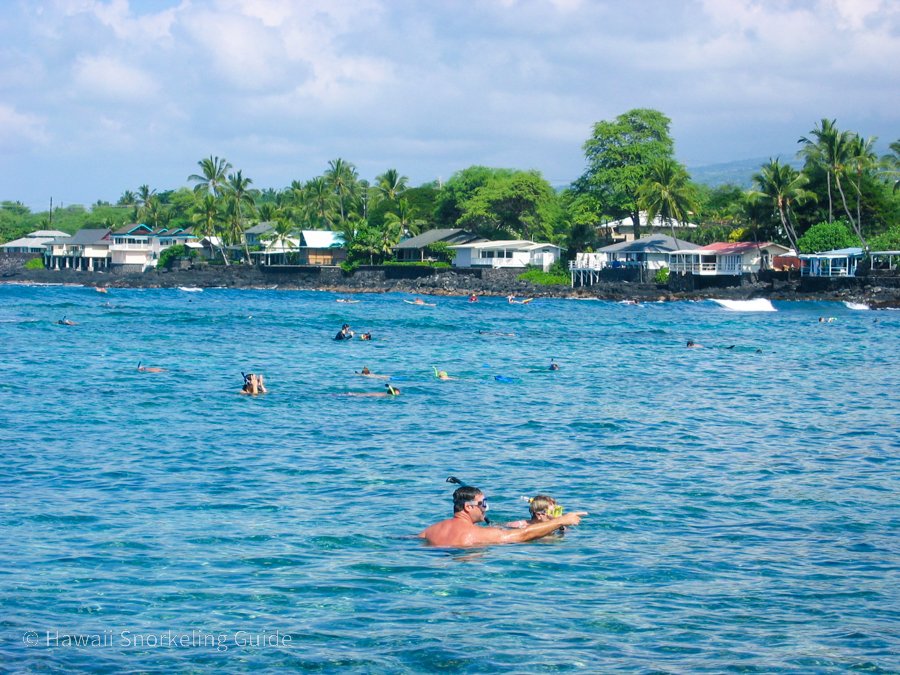 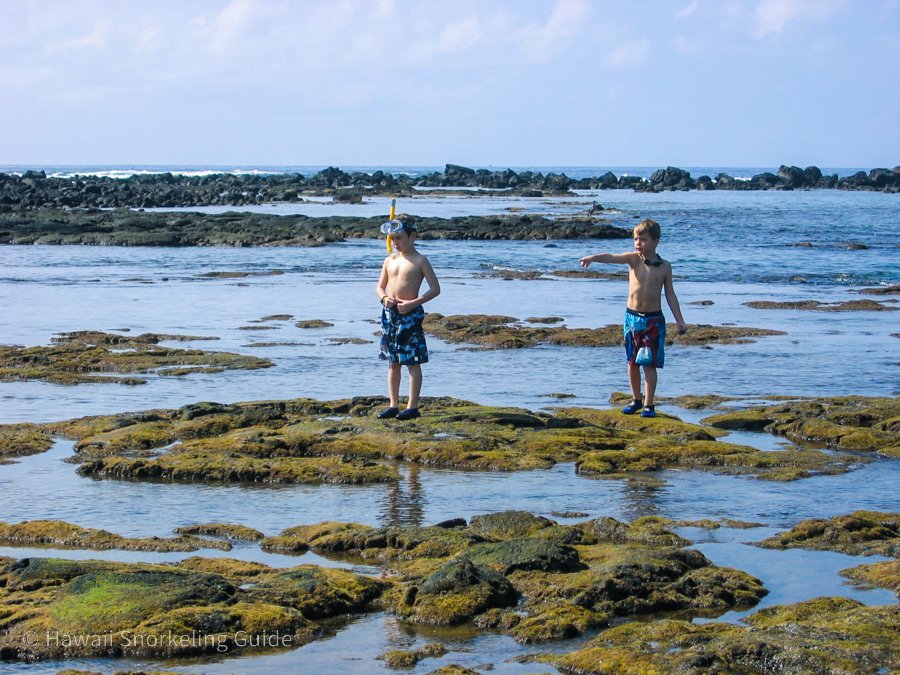 The fish here are unusually comfortable around snorkelers.  Typically, schools of large surgeon fish will swim up and greet you as you wade in.  I’ve even had them nibble on my fins while swimming.

The cove is almost completely surrounded by a partially submerged rock wall that keeps the larger waves out while still allowing the gentler ocean currents to flow in freely.  These fresh currents carry life bringing nutrients, feeding and multiplying the marine life.

I really get a kick out of hearing the excitement of other snorkelers as they interact with Kahaluu’s fish and sea life.  The water at Kahaluu Beach is so shallow and calm, it’s perfect for the first time snorkeler.

One of the reasons for Kahaluu’s abundant fish population is most of cove is less than neck deep.  The deepest spot barely exceeds 10 feet even at high tide.  The shallow water allows sunlight to penetrate all the way to the bottom growing lots of healthy coral.  The coral, in turn, houses and feeds all the cove’s marine life.  The bottom of the cove is made up of a base layer of lava rock and coral with scattered patches of sand.

Most of the shoreline at Kahaluu is lava rock flats with a couple of small sand ‘entries’.  Enter the water via these small sand patches.  You’ll have an easier time putting on your fins while sitting in the sand than trying to balance on the surrounding lava rocks.

When the tide goes out, the rock flats form shallow tide pools that are fun to explore.  Please watch your step as you walk on the wet lava rock, the seaweed makes it very slippery. 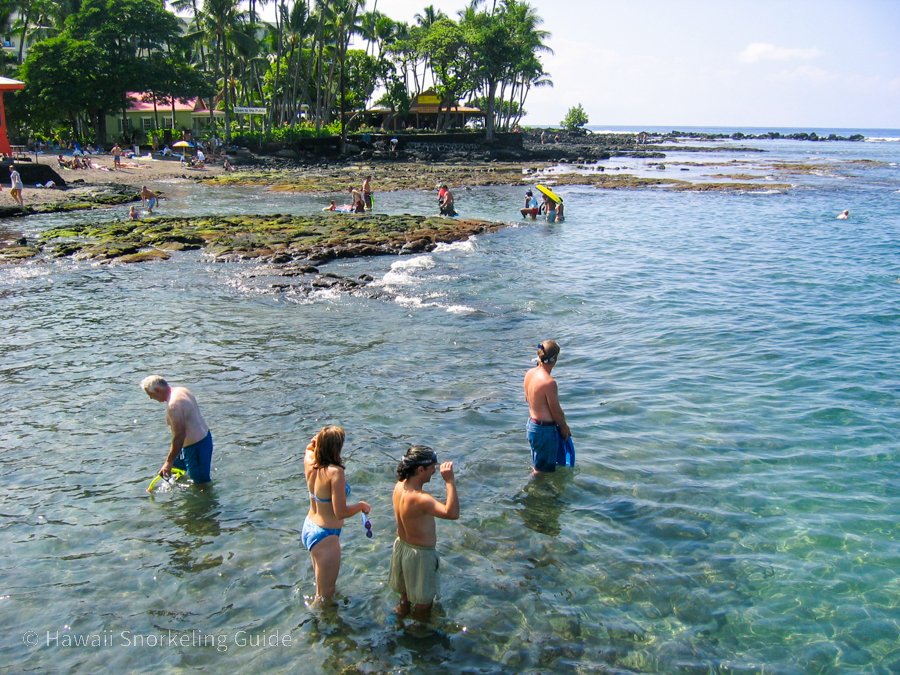 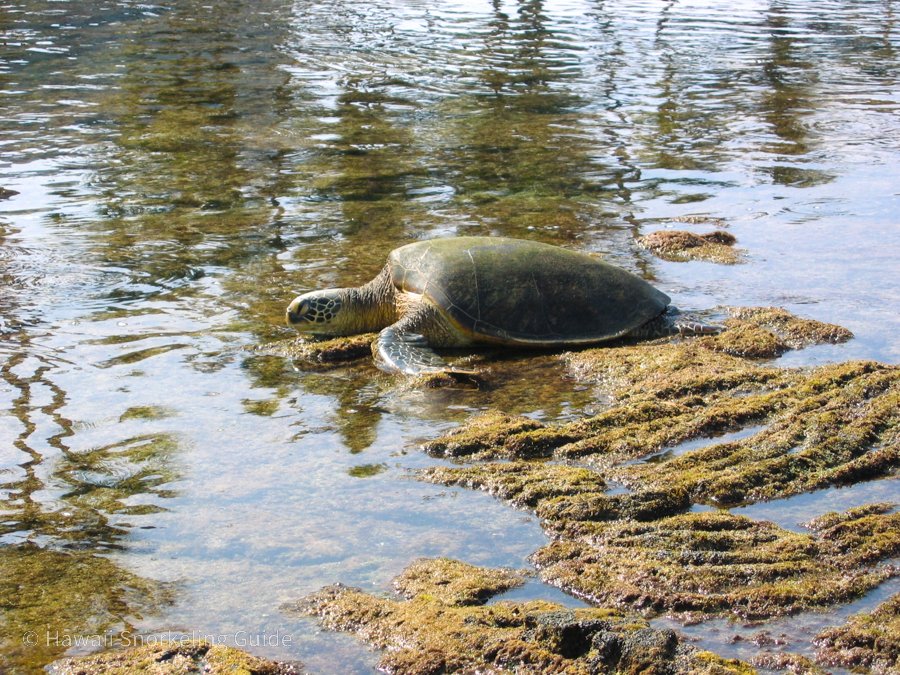 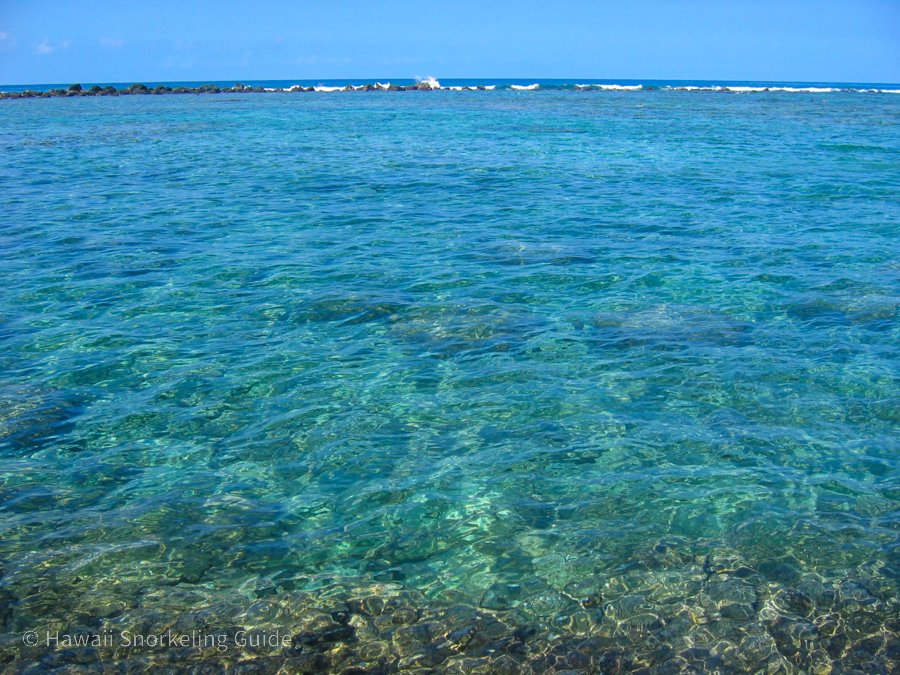 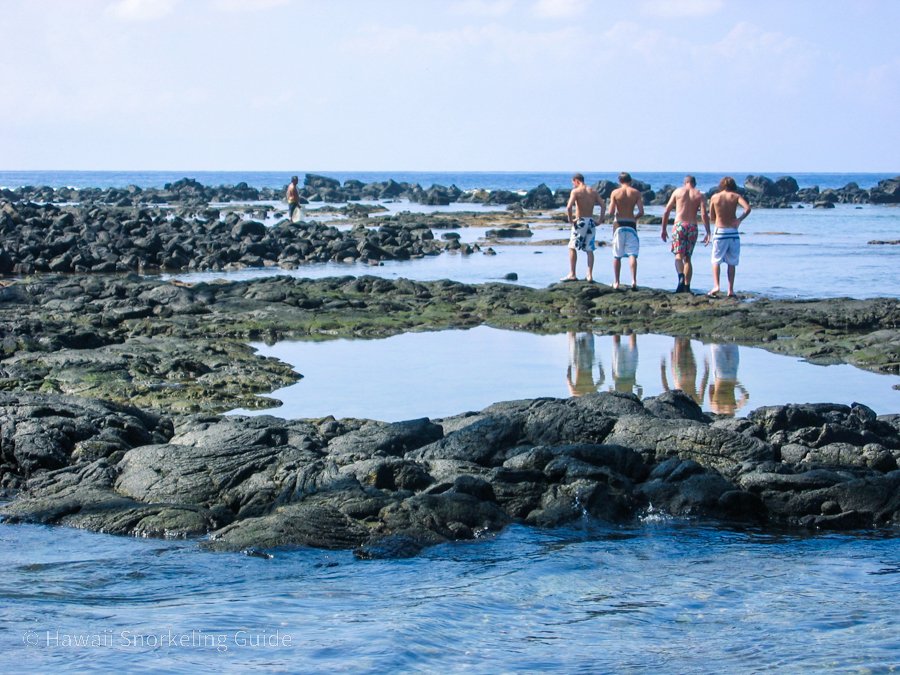 Insider Tip: There will be schools of fish congregating near the sandy entries hoping to catch the small bits of seaweed and food that’s kicked up by snorkelers entering the water.  All the swirling sand here tends to make the water cloudy.  When you’re done saying hello to the fish near the shore, be sure to swim out towards the center of the bay for the clearest water and great picture taking.

Speaking of picture taking… If you have kids, remember to pick up a disposable under water camera so they can take fun photos.  The kids will have plenty to brag about when they get home.

Kahaluu Beach is also famous for it’s sea turtles, or “honu” in Hawaiian.  Of all the places in the ocean for a turtle to swim, for some reason they LOVE Kahaluu Beach.  On any given day you’ll be able to see quite a few of them feeding on seaweed and sunning themselves on the warm rocks.

While sleeping on shore, their shells tend to have the color of the surrounding lava rock so keep your eyes open.  Because of their shell color and because they lie so still, I have actually seen people almost trip over sleeping turtles.

Turtles are a protected marine species in Hawaii so remember to keep your distance while enjoying these beautiful creatures.  A calm beach, warm sun, lots of seaweed to eat… I guess to them, Kahaluu Beach is kind of like turtle heaven.

Insider Tip: Would you like to get closer to the marine life while snorkeling?  Instead of swimming straight at them, try and swim parallel to them.  As you can imagine, a tiny fish has no idea of your intentions and can get quite nervous when someone as large as yourself comes swimming right at them.  Take a second to observe it’s general swimming direction.  Then slowly swim parallel to it while gently drifting closer.  No matter how slow fish may appear, you will never be able to catch up to them using sheer speed.  Try cleverness instead.  Another point to keep in mind is that marine life can hear everything that happens underwater, especially your fins splashing on the surface.  To a fish’s sensitive ears, all your splashing has the subtlety of a semi-truck.  Try to keep your kicking slow and steady and below the surface of the water.  The best way to get close to most marine life is to swim calmly and appear as least threatening as possible.  Try it.  You’ll be surprised at how close a relaxed fish will allow you to get. 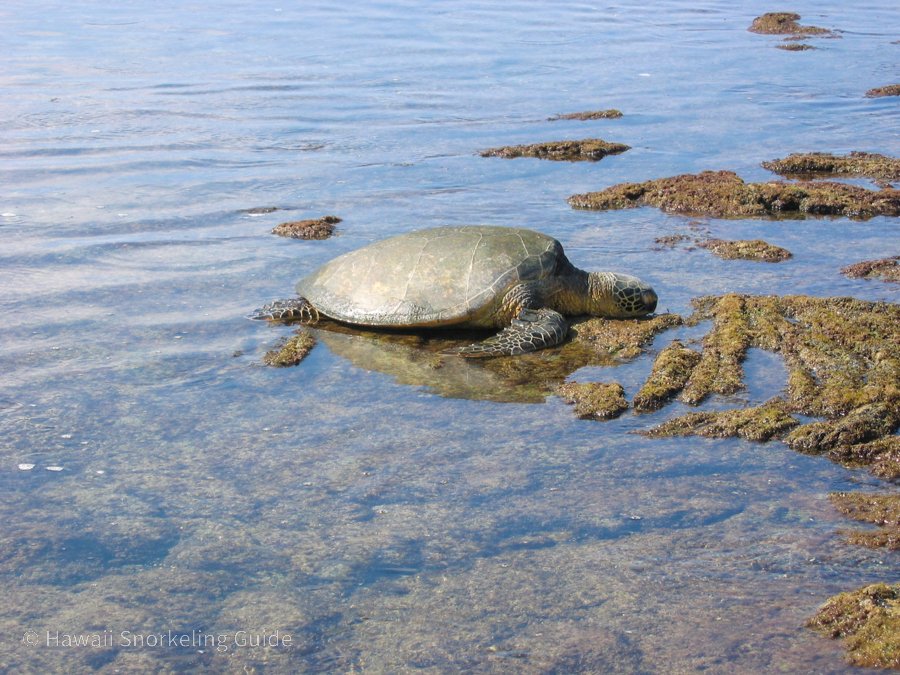 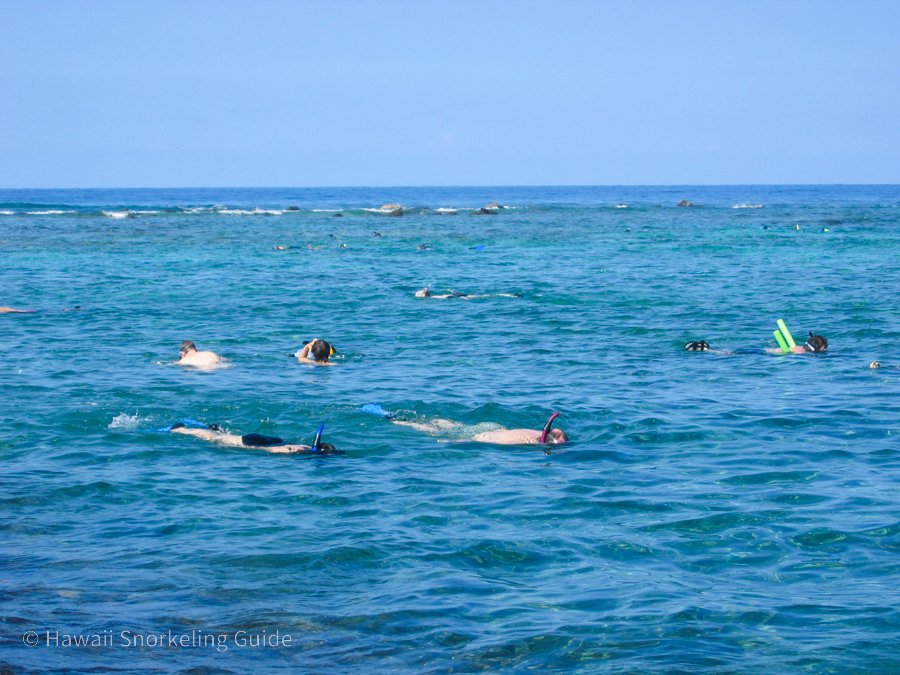 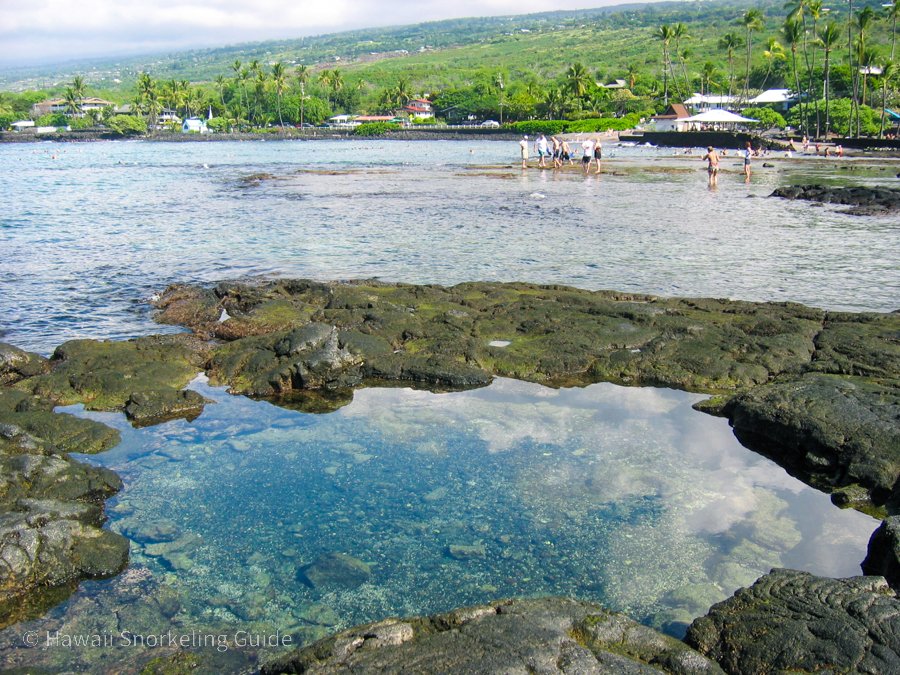 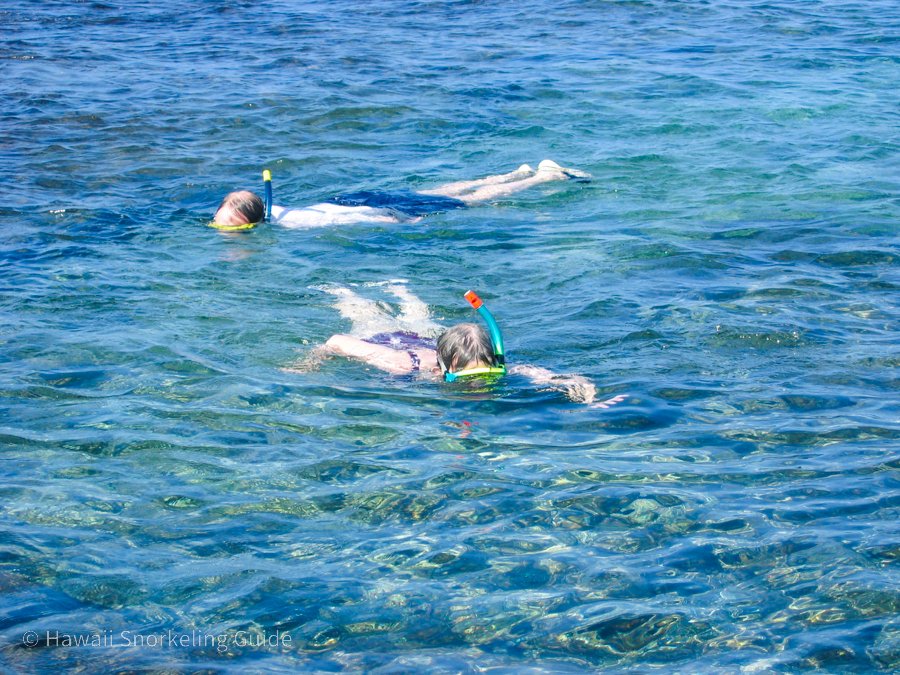 Kahaluu Beach has restrooms, showers, picnic tables, and two large pavilions.  It also has a lifeguard on duty.  The parking lot can get full quickly so the earlier you go the better.

Did you forget to bring you goodies to the beach?  No need to panic, you will be in the town of Kailua Kona so everything is conveniently located nearby.  Can’t say that about most snorkeling beaches.

How do I get to Kahaluu Beach Park?